In ancient times, Akhmim in Upper Egypt was a provincial capital called Ipu, Apu or Khent-min. It was the hometown of pharaoh Akhenaten’s mother Tiye and of pharaoh Ay, who followed Akhenaten’s successor, Tutankhamen.

During the Greco-Roman period the temples of Akhmim, then known by the Greek names of Khemmis, or Chemmis, and Panopolis, were among the largest of Egypt. Even in the Middle Ages, they were admired as one of the Wonders of the World, yet today they have all but vanished.

The Manual to the Eternal Afterlife 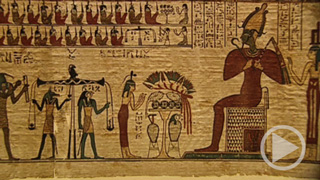 The Book of the Dead

The Book of the Dead is an illustrated papyrus dating back to around 1150 B.C. While his heart is weighed on the scales of justice, the deceased pleads his case before Osiris. If he fails he will be consumed by the Devourer of Souls…
▶ The Berlin Egyptian Museum▶ Akhmim
02:43
This website uses cookies - for more information about this and your rights as a user, please see our privacy policy. Click on "I agree" to accept cookies and to be able to visit our website directly".