The historic region of (Ancient) Khorasan included all the north-eastern areas of the Iranian empire, centred around great cities like Balkh and Herat (now in Afghanistan), Merv (now in Turkmenistan), Samarkand and Bukhara (now in Uzbekistan) as well as Nishapur and Mashhad which are still part of Iran.

In the Islamic period, Khorasan was considered the cultural heartland of Persia. It was here that the New Persian language developed, and many of Iran's greatest geniuses hailed from here, including poets Rudaki, Ferdowsi and Rumi, and scientists Omar Khayyam and Avicenna, or Ibn Sina.

Today, only the Western half of historic Khorasan is part of Iran where it is divided into three provinces.

A Masterpiece from Khorasan 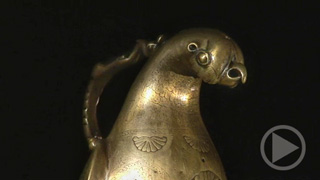 This bird vessel, possibly made in the Iranian province of Khorrassan, may have been used to burn incense. It’s a bit of a surprise – Islamic art isn’t known for its depiction of living beings. But there has never been a ban of such depictions.
▶The Museum of Islamic Art▶ Khorasan Province
01:37
This website uses cookies - for more information about this and your rights as a user, please see our privacy policy. Click on "I agree" to accept cookies and to be able to visit our website directly".