Between the 8th century BCE and the 4th century CE the Kingdom of Kush was a major power in Nubia, south of Egypt. During the 25th dynasty around 700 BCE, the kings of Kush even ruled Egypt. Its culture became a bridge between the Egyptian and Mediterranean cultures and Africa; it is considered the first civilization of Black Africa.

Around 300 BCE, the city of Meroë became the capital of the realm. The Kings of Meroë controlled more than 1000 km of the Nile Valley; the wealth of the kingdom was based on a thriving iron industry and trade relations to as far as India and China.

The ruins found by archaeologists indicate that the city of Naga, or Naqa, too must have been an important metropolis: there are remains of an urban agglomeration, two notable temples - one devoted to Amun and built between 50 BCE and 50 CE, the other to Apedemak - a Roman kiosk, and several burial grounds.

Since 2011, both Meroë and Naga are part of the UNESCO World Heritage, listed as "Archaeological Sites of the Island of Meroë".

The Cities of Kush 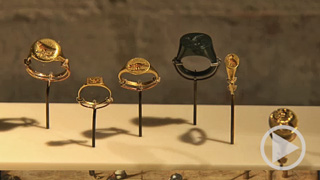 The Gold Treasure from Meroë

Between 350 BC and 300 AD the city of Meroe was capital of Kush. In the city's royal burial ground, in 1834 the jewellery of Queen Aminshaketo was found – truly worthy of a queen!
▶ The Berlin Egyptian Museum▶ Kingdom of Kush
01:12 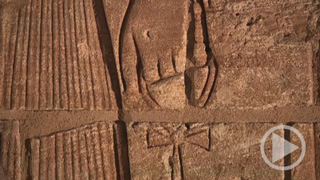 Naga, or Naqa was a major metropolis of the Kingdom of Kush. Here it's particularly obvious how Kushitic culture serves as a bridge between the Mediterranean world and Africa…
▶ The Berlin Egyptian Museum▶ Kingdom of Kush
01:49
This website uses cookies - for more information about this and your rights as a user, please see our privacy policy. Click on "I agree" to accept cookies and to be able to visit our website directly".