The area around the Indus River has always been strategically important, being the crossroads of South Asia, Central Asia and the Middle East. It was the site of several ancient cultures including the Neolithic Mehrgarh and the Bronze Age Indus Valley Civilization (2800-1800 BCE). Later it was part of numerous empires such as the Achaemenid Empire, the Umayyad Caliphate, the Mongol Empire, the Moghul Empire, and the British Empire.

Greeks, Persians, Indians, Arabs - Buddhists, Hindus, Christians, Sikhs, and finally Muslims all left their marks on the area. The Moghuls introduced Persian literature and high culture, establishing the roots of Indo-Persian civilization in the region. With the fading of their empire in the 18th century, the British East India Company became the dominating power in all of India. Pakistan gained independence in 1947; in 1956 it was proclaimed an Islamic Republic.

A Masterpiece of the Mogul Era 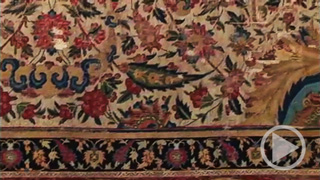 Groups of lions, leopards, antelope, and Chinese unicorns romp about in between blossoming tendrils with palmettes and flowers – a wonderful carpet that must have been made around 1610 for a wealthy prince in Lahore , then part of the Mogul Empire.
01:27
This website uses cookies - for more information about this and your rights as a user, please see our privacy policy. Click on "I agree" to accept cookies and to be able to visit our website directly".