The area of modern Poland has been settled for thousands of years; however, scholars disagree about who exactly the first settlers were.

Polish history becomes manifest with the ruler Mieszko I. who united the Slavic tribes in the area and who was baptized in AD 966. In 1025 the Kingdom of Poland was founded; in 1569 it formed a political association with the Grand Duchy of Lithuania called the Polish-Lithuanian Commonwealth. The Commonwealth existed until the end of the 18th century, when the Polish territory was partitioned among Prussia, the Russian Empire, and Austria.

Until the end of World War I, Poland effectively disappeared from the maps. In 1918 the country finally regained its independence - only to be again divided and subjugated by Nazi Germany and the Soviet Union just two decades later. In World War II, more than six million Polish citizens died. After the war, Poland became a satellite state of the Soviet Union. In the 1980s, however, the Polish "Solidarnosc", or "Solidarity", movement was the most powerful driving force of the revolution that was to end state socialism in Eastern Europe. In 1989, Poland has become a democratic republic and subsequently joined both NATO and the European Union.

A Fairy Tale Treasure: Traces of a Mysterious Past

From the Asian Steppes to the Central European Backwaters 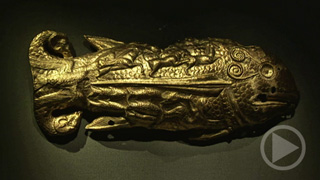 In 1882, a farmer in the village of Vettersfelde ploughed his fields – and dug up a fabulous gold treasure. It turned out to be an archaeological sensation: he had found a cache of 2500-year old Scythian treasures, showing amazing goldsmith's artistry.
02:08
This website uses cookies - for more information about this and your rights as a user, please see our privacy policy. Click on "I agree" to accept cookies and to be able to visit our website directly".