Even though it must have been inhabited since the Bonze Age, Potsdam only gained importance when Prussian Elector Frederick William I chose it as a summer residence in 1660. In 1744, King Frederick the Great had a new summer residence built – the famous "Sanssouci" Palace with its fine Rococo interiors and a spectacular park.

Over the next generations, a plethora of palaces and delightful gardens were constructed throughout the city and along its many lakes. While Berlin was the official capital of Prussia and later of the German Empire, most of the time the court was in Potsdam, making the city just outside Berlin the de facto capital - until Germany became a republic in 1918.

Today Potsdam is the capital city of the German federal state of Brandenburg; the Prussian Palaces and Parks are listed as part of the UNESCO World Heritage.

Pictures from a Sophisticated Court 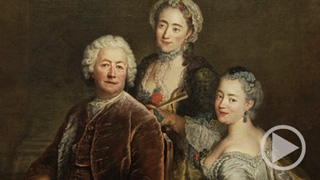 Prussian king Frederick the Great was a lover of all things French: his court painter, Pesne, was French; as was his favourite painter Antoine Watteau, whose elegant scenes of French Rococo he displayed in the first ever building devoted to paintings.
▶ The Berlin Gemäldegalerie▶ Potsdam
06:42
This website uses cookies - for more information about this and your rights as a user, please see our privacy policy. Click on "I agree" to accept cookies and to be able to visit our website directly".