Syria is one of the heartlands of the Muslim world. As part of the "Fertile Crescent" it was a centre of Neolithic culture as early as 10.000 BCE. Later it was settled by Canaanites, Arameans and Phoenicians, the famous merchants.

It was then incorporated into the Persian Empire. From 64 BCE, Syria became one of the wealthiest provinces of the Roman Empire; several Roman emperors hailed from here. Palmyra, though settled since neo-lithic times, arose to wealth and fame around the second century CE. After the Muslim conquest in 640 CE, the caliphs made Damascus their residence; Syria formed the central part of the Umayyad Empire.

Even when the Abbasids moved the capital to Baghdad after 750, the Levant still prospered. It was the ending point of the Silk Road until the discovery of a sea route from Europe to the Far East gradually ended overland trade after the 16th century CE. In the following centuries, Syria was a rather remote region of the Ottoman Empire. After its breakdown, Western superpowers divided the region amongst themselves and Syria was occupied by France in 1920 until it finally became independent in 1946. Since 1970, Syria is ruled by the Assad family. In 2011, protests against autocratic rule were violently suppressed and the country fel

Caliphs and Merchants: Cities of Culture in Syria

A Merchant's Display of Tolerance 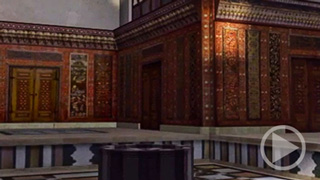 In 1600, Isa ben Butrus, a Christian merchant, had his reception room painted with an abundance of scenes. Reminiscent of Ottoman book illuminations, they portray themes that are at once part of the canon of images of Christianty, Judaism and Islam.
02:53
This website uses cookies - for more information about this and your rights as a user, please see our privacy policy. Click on "I agree" to accept cookies and to be able to visit our website directly".