The Renaissance in Central Europe

Plants in a crystal vase... Hans Holbein the Younger studied closely the way light was refracted – in the water, and by the glass above the water. And here are the stalks above the rim of the vase. Rosemary, basil, wallflower, and carnations. Because they keep their colour until they wilt, carnations symbolise eternal fidelity. Which is most fitting, as this portrait was painted for the sitter's betrothed.

Like Hieronymus Holzschuher, Georg Gisze was a prosperous merchant. He lived in London, but hailed from Gdansk. He wanted to impress his bride-to-be back home. So Holbein showed Gisze in the context of his life as a merchant – and wrote below just to make sure:

"What you see here, this picture, shows Georg's features and appearance. So lively are his eyes, thus formed are his cheeks, at thirty-four years of age in the Year of Our Lord 1532."

Gisze is in his counting house, surrounded by the things he uses: a signet and a seal ring, quills, and account books. There is a lovely string dispenser... with string dangling out the bottom. And all around him are letters, indicating Gisze's extensive correspondence. The detail is so fine, one can even read the words. He is holding a letter from his brother: "To be handed to the honorable Jergen Gisze in London in England, my brother."

Holbein also lived in London. He was from Augsburg but moved as a young man to Basel, where he first attained renown. Protestantism came to predominate there, and it was hostile to visual art. So in 1532 Holbein went to England. He specialised in portraits and in 1536 was appointed Court Painter to King Henry the Eighth. Just seven years later, he died in London in an epidemic of the plague. 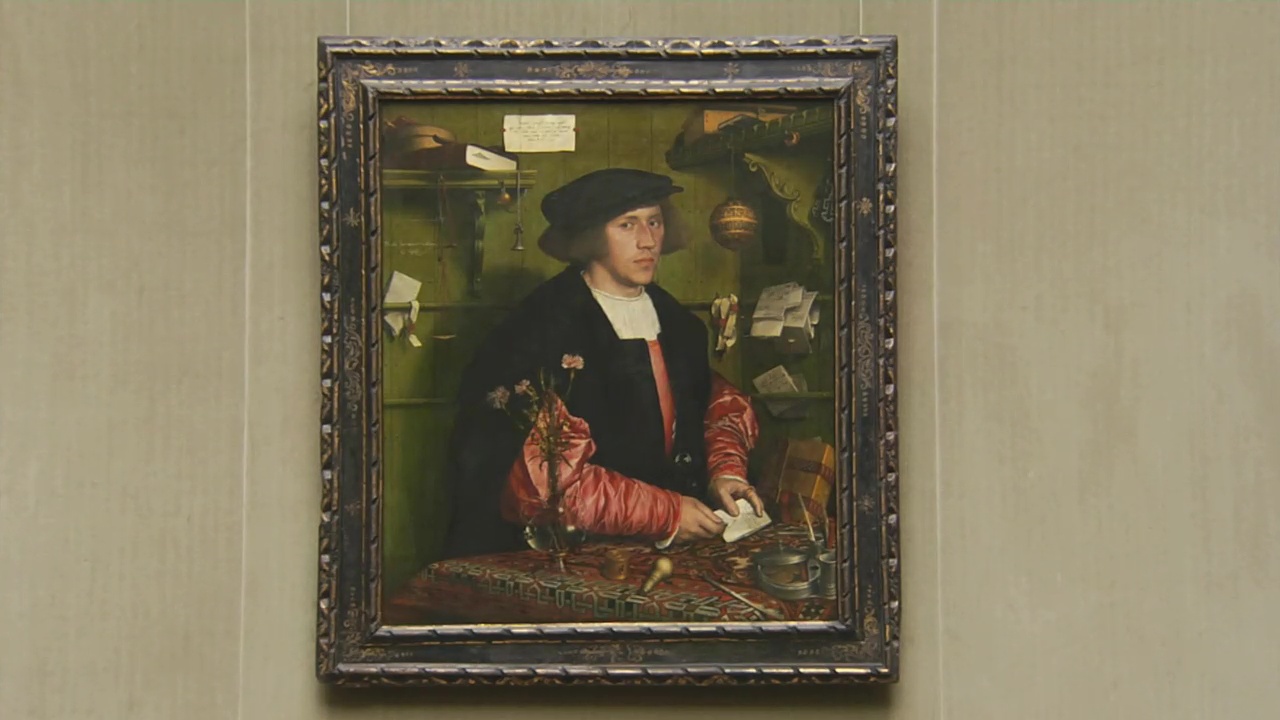 Holbein and Dürer were illustrious artists. Gisze and Holzschuher, whose portraits they painted, were successful entrepreneurs. Lucas Cranach was both artist and entrepreneur. His real name was Lucas Maler. He was born in 1472 in the Franconian town of Kronach. Hence the new surname he adopted. After studying painting, he spent three years in Vienna, where he painted this picture, a founding document of the "Danube School". Joseph, Mary and Jesus on their flight into Egypt – seated in a southern German landscape! In true Renaissance manner, the richly detailed landscape and plants play an important role. Here too there are strawberries symbolising the Passion of Christ. This time, thistles allude to Christ's Crown of Thorns.

The angels making music look like very real children – with wings attached. And like all German artists, Cranach too had learned from Dürer – and borrowed the figure of Joseph from one of his woodcuts.

This is the first picture that Cranach signed – with his monogram LC and the year, 1504. A few years later he adopted a new trademark – his famous winged snake with a ruby ring in its mouth. It was the emblem conferred on Cranach by Frederick the Wise, Elector of Saxony, who in 1505 appointed him painter to his court in Wittenberg ... where, forty years later, he painted this incomparable picture: The Fountain of Youth – about one of mankind's ancient dreams.

On the left, old women emerge out of a rocky barren landscape. What then happened in the fountain was later described by the Master Singer of Nuremberg, Hans Sachs:

The water had such power
That whoever was afflicted with age,
Even someone eighty years old,
And sat in the fountain for one hour
Would become young again,
His spirits, heart and all his limbs.

There are, however, no men in sight in this pool! For Cranach, it was evidently enough if women regained their youthfulness.

After an hour they leapt out of the round pool,
Beautiful, shapely, fresh, young and health,
Light-hearted and cheerful,
As if they were twenty years old.

The fountain is above all a fountain of love. Here we see Venus and Cupid. And after their bath, the women enter a fertile landscape and are welcomed by men. Perhaps Cranach was indulging in his own daydream. He was 75 when this was painted.

Though it is impossible to say whether he painted it all himself. It could, at least in part, be a product of his large and busy workshop. The beautiful young women on the right all look the same – their hair, their breasts, their curving bellies – typical of the Cranach brand. Such girlish women can be found in many paintings produced in his workshop. As in this copy of an altarpiece by Hieronymus Bosch. Cranach's enterprise churned out lots and lots of pictures sporting naked bodies. They in particular sold like hot cakes. In all, a thousand paintings still exist, out of a total of some five thousand. Even the Latin inscription on Cranach's tombstone notes that he painted very fast! 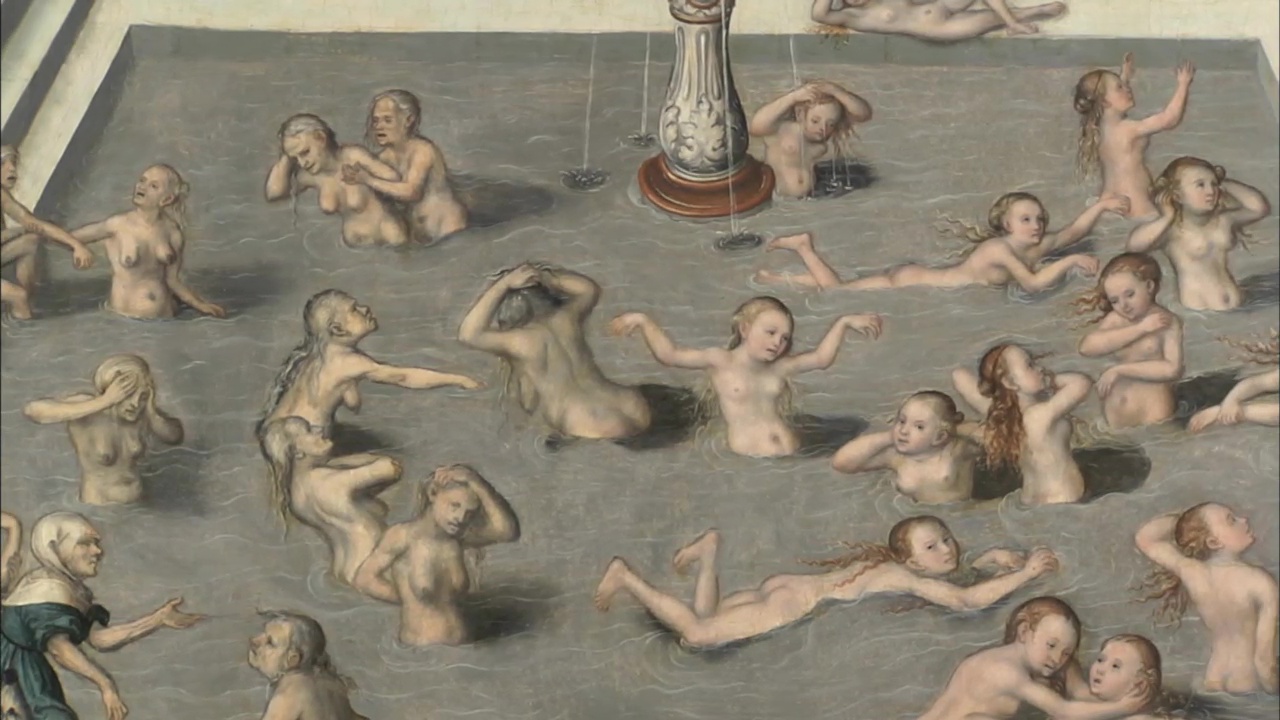 And he did much more than paint: he opened a wine tavern, ran the town pharmacy, became a publisher, bookseller and city treasurer, and was even mayor of Wittenberg for several terms. He was a true entrepreneuer.

Just down the road, his good friend Martin Luther used to preached at the Castle Church. Cranach produced many paintings and prints of Luther, and thus established a Protestant visual tradition. The workshop he founded, with its winged-snake trademark, existed for more than a century and a half. Its last owner was Cranach's greatgrandson.

Six hundred kilometers to the west, and at about the same time, another dynasty of illustrious painters was emerging. Members of the clan included the best painter of peasant scenes and the greatest representative of Flemish Baroque.