This painting also comes from the Giustiniani collection in Rome. Gerard van Honthorst from Utrecht probably lived for a while in the Giustinianis' palazzo as a young man. He was one of a group of Dutch painters who adopted Caravaggio's dramatic new style while in Italy. They became known as the Utrecht Caravaggists.

Their work caught the attention of a young painter from Leiden named Rembrandt Harmenszoon van Rijn. He must have been very impressed – particularly by the treatment of light – as we can see in this early painting. It is known as The Money Changer, but is often interpreted as illustrating the biblical parable of the Rich Fool.

After a bountiful crop, a farmer decided to pull down his barns and build large new ones to store his grain and his goods. But God said to him:

"Fool! This night your soul will be required of you; then whose will those things be which you have provided?"

The scales, coins, money bags, thick account books and invoices are all brightly illuminated. Rembrandt also used light to dramatic effect to indicate the miserliness of this man. Unlike Caravaggio, however, he reveals the source of the light – a candle. And that makes the scene all the more realistic and self-contained.

Rembrandt was just 21 when he painted this in 1627. A few years later he was so famous that he received ever more commissions from Amsterdam. During the Golden Age of the Netherlands, Amsterdam was the richest city in Europe. Rembrandt soon opened a workshop there, and attracted many pupils, who each paid him the enormous sum of one hundred guilders a year.

But it was worth while studying with Rembrandt: He was an excellent teacher, who was able to bring out the best in each. And he was quite self-assured. He painted a great number of self-portraits – more than almost any other artist. He enjoyed adopting different roles – here he is Samson, threatening his father-in-law. Over the years, he amassed a large collection of costumes and props, works of art, and curios. He spent more on them than he could afford. At the same time his manner of painting was slowly going out of fashion. Times became difficult. The Netherlands became embroiled in war. And many commissions for paintings went to his pupils instead of the celebrated master. Rembrandt had trained his own competitors. At fifty he was bankrupt. He had to sell his collection and his house, and move into modest quarters. Only later would he regain world renown. 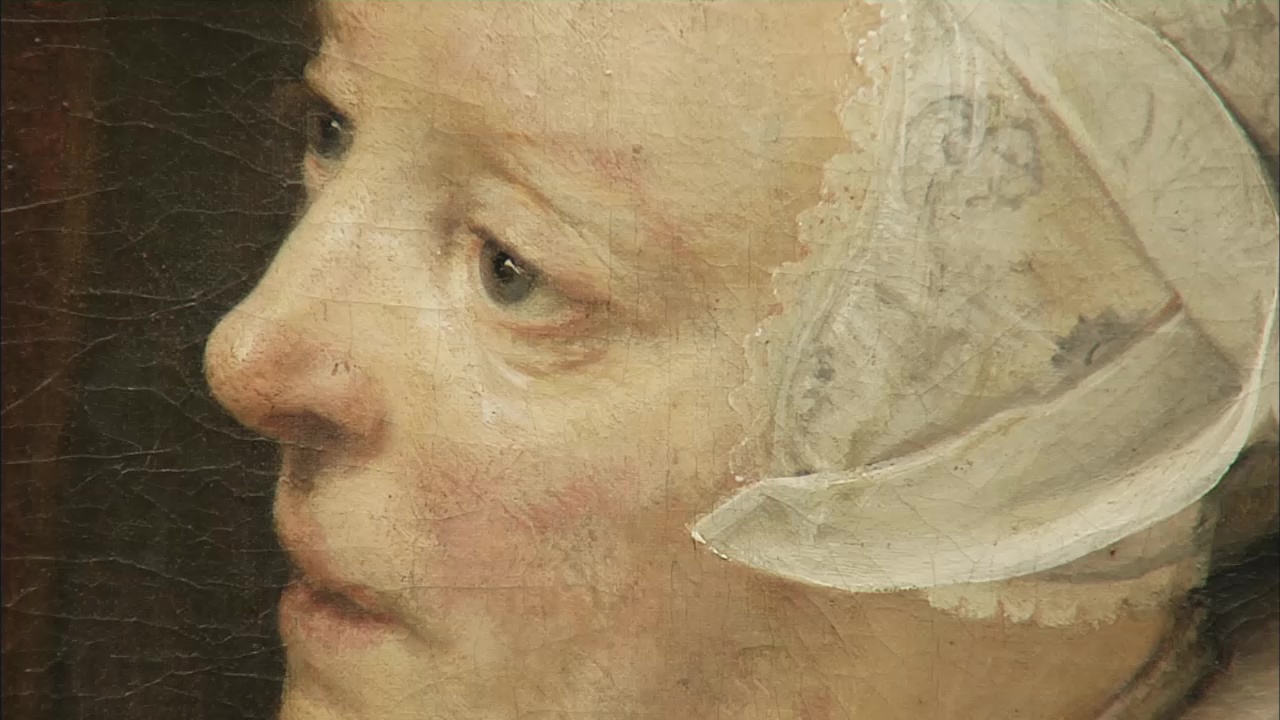 Today, the Rembrandt room is the heart of the Gemäldegalerie. Whether one first looks at Northern European painting or Italian, this is where one ends up – in the only octagonal room in the museum.

The Gemäldegalerie has sixteen works by Rembrandt – the largest collection of his work outside the Netherlands. Worldwide there are about three hundred and fifty authenticated Rembrandt paintings. The number of works attributed to him used to be about twice as high – until the rest were revealed one by one to be the work of his pupils or his imitators… Including one painting that used to be adored as one of the master's greatest: the Man with the Golden Helmet – once the most famous painting in the gallery! Modern-day research has concluded that it is NOT by Rembrandt.

We do not know who painted it, or who the subject is: it could be Mars the god of war. Or merely the head of an archers' guild. The most striking element is the golden helmet – very grand, and long out of fashion.

This was what most aroused the suspicion of modern scholars. First of all, the paint is applied very thickly, it almost looks like a relief. That is not typical of Rembrandt. Then the extreme lighting. Too showy and stagy for the master. And the motif itself… The centre of attention is not the man but the gleaming glinting helmet.

"Rembrandt dealt with light and dark masterfully, and enjoyed depicting costumes, or bright helmets — but to paint the one motif in isolation?! As early as nineteen hundred a famous art historian pointed out that this is the "still life of a helmet". That should have got people thinking – It certainly did make us think. That is why we examined the picture in such great detail."

Very modern technology was used to do so: neutron-activation autoradiography. The art historians and restorers teamed up with Nuclear physicists. At the Helmholtz Centre for Materials and Energy the painting was irradiated with neutrons, which activated the nuclei of atoms in the paint. The different kinds of atom then emitted radiation with different half lives. This beta radiation was captured on imaging plates at the surface of the painting.

"The first film remains in place for two hours. It is darkened by short-lived isotopes – in this case, the manganese in the brown pigment. So on the first image we see the distribution of brown paint in the picture. That film is then removed and replaced by another – after the radiation from the manganese has subsided. The second film remains in place for a day. It is darkened by the copper in the pigments azurite, malachite and verdigris. So we can see the green and blue colours on the second film. The third remains in place for three days. So on the different films we can see traces of the different colours."

Gamma rays are measured separately, as a check on which elements are present and in what quantity. What is so important about this method, is that it reveals colours in layers of paint that were subsequently painted over. In this way, the underdrawing of the Man with the Golden Helmet became visible.

„We see that the brushwork was very hesitant, and slow. It stopped and started. That caused these blobs of paint. Such hesitancy with the brush is not at all typical of Rembrandt. He painted fast. The brushwork is dynamic, and often has an upward trajectory.“

The verdict was clear. It was the future director of the museum who had to tell the world that the painting was not even by a pupil of Rembrandt!

"I think we were all taken in by the gleam of the golden helmet. But we should not have been! A Dutch colleague once said the picture is more rembrandtesque than a real Rembrandt. What that means is that whoever painted it wanted to outdo Rembrandt in certain typical respects – in this case, the heightened contrast between dark and light. That contributes to the painting's sensationalist ingratiating quality. Rembrandt was more restrained in his means of expression, and much more refined." 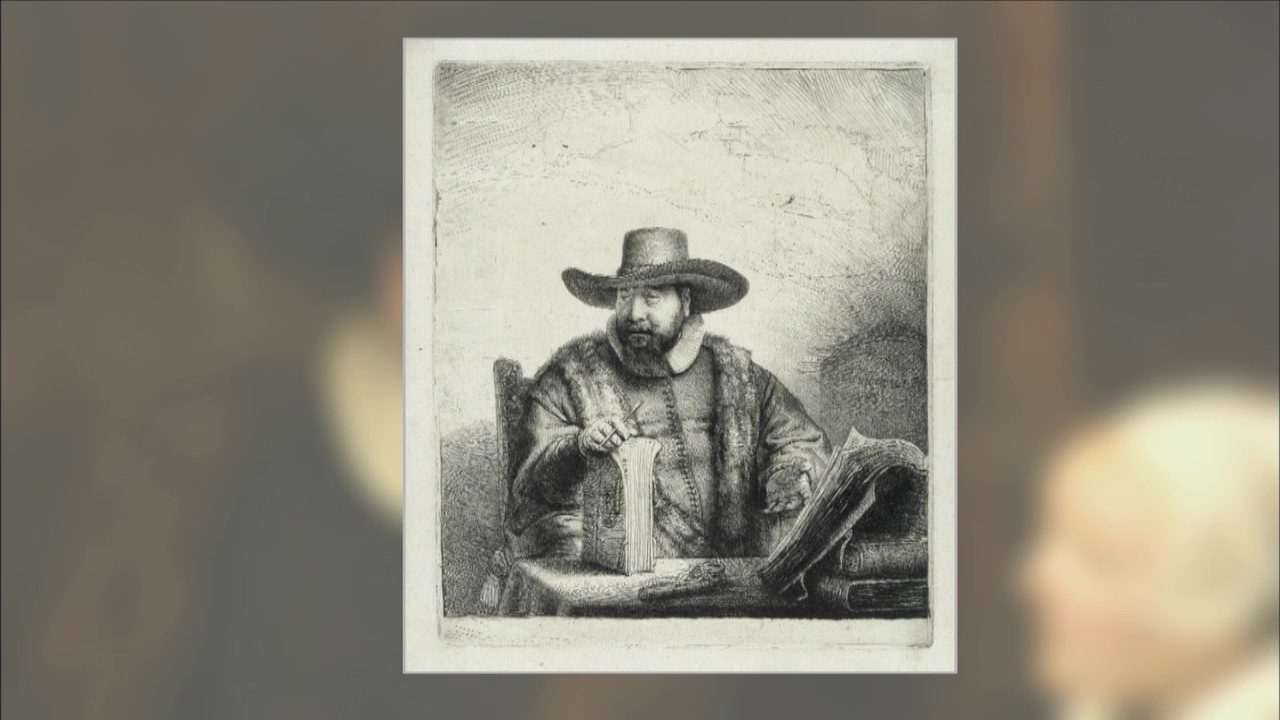 A particularly impressive example of that refinement is his portrait of Cornelis Anslo, which dates from 1641. Rembrandt had to solve a considerable problem here: Anslo was a rich cloth merchant and a Mennonite preacher. The Mennonites are strict Protestants, for whom only the word of God counts and who have a deep mistrust of visual representations.

This etching from about the same time addresses exactly that issue: In the foreground are books. The picture that once hung from the nail is now standing on the floor and facing the wall. "Well, Rembrandt: go ahead, paint Cornelis's voice! His visible form is not important. You perceive what you cannot see through your ears. Who wants to see Anslo, must listen to him."

Those are the words of the poet Joost van den Vondel. Rembrandt's solution to the problem is brilliant.

One third of the painting is taken up with the Bible, which is brightly illuminated. The Bible is the source of the Word. Anslo is talking, his mouth half open; he is leaning forward as if to make a point. One can almost hear his voice. That effect is enhanced brilliantly through the figure of his wife Aeltje, seated beside him. She is listening intently to his words. Her heads and her hands are lit more brightly than anything else in the picture. Our eyes are drawn to her straightaway. Rembrandt thus makes clear that the most important thing is to listen, calmly and closely. Meanwhile Aeltje's gaze is directed at the Bible. And so we come full circle.

At the very centre of the picture is Anslo's left hand. Amazingly, from wherever you look at the painting, it is as if Anslo the preacher is reaching out of his world, extending an invitation to all to listen to his words.

Rembrandt solved the original problem by cleverly directing the gaze of the viewer by means of light. He turned the portrait into a double portrait and into a narrative painting: he does not merely paint a man but tells us about the importance of listening.