The Colosseum On Its Way Into The Age Of Modernity

The Colosseum on its way into the age of modernity

Deterioration set in. The basement filled with rubble. As Rome’s population declined in the early middle ages, the center of the city moved, and suddenly the amphitheater was on the outskirts. The first ‘tenants’ moved into the structure. They used the vaults as living quarters, divided the corridors into stalls, and built shelters for carts and tools. Retailers sold their wares here. On the space where the gladiators had once fought to the death Romans built cottages with gardens.

A thousand years after building work started documents first give the structure the name Colisaeus. Once Emperor Nero had set up a 35 meter high statue of himself, based on the Colossus of Rhodes. In order to ensure that after Nero’s death nothing was left to recall the tyrant, Vespasian had added an aureole, or solar crown to the statue and dedicated it to the Sun God. For centuries the Colossus stood next to the amphitheater. Finally it was named Colisaeus after the statue – a name which eventually became ‘Colosseum’. In the Middle Ages people read about the spectacles in ancient writings, but because of the statue the Colosseum was thought to have been a temple dedicated to a sun god who ruled over lightning, thunder and rain.

In the 12th century the colossal building developed a strategic importance. One of the most influential patrician families, the Frangipani, built several palaces into the ruins of the ancient center of imperial power. When two rival popes were elected in 1130, the Frangipani supported the victorious candidate. On Innocent II’s order they turned the Colosseum into a fortress. At that time the seat of the pope was the Lateran Palace, just a stone’s throne away from the arena. 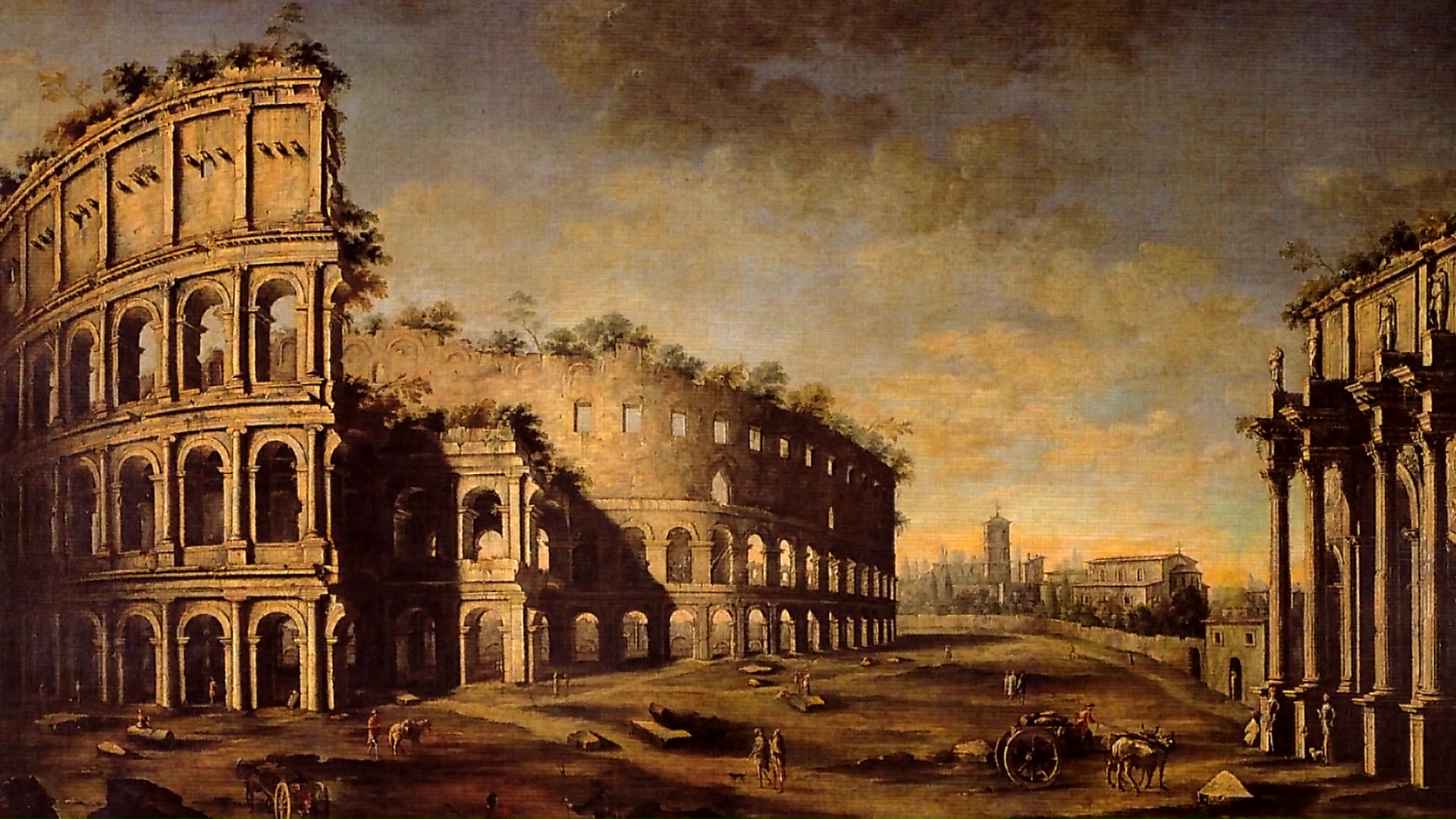 Four hundred years later, October 1517. A German theology professor named Martin Luther posted his 95 Theses on the All Saints’ Church in Wittenberg. In them he demanded a reform of the Roman Catholic church – and kicked off a religious war. It was a war that was not only fought with the sword. The Catholic Church’s propaganda fidei, the propagation of the faith was also carried out with the word, and it harked back to Christian origins, to martyrdom.

Even though there is no proof that the Romans had thrown Christians to the lions in the arena, for the church leaders the Colosseum was a powerful symbol. This is where the Christian faith was said to have prevailed over the world power of ancient times.Around 1700 the Italian architect Carlo Fontana developed a gigantic project. A church was to be built at the site of the ancient martyrdom. It would stand in the middle of the weathered amphitheater with its dome at eye level with the ruin. An arcade was to architecturally extend the arches of the Colosseum. However, the project was never realized; it was too expensive even for the popes.

Instead, after 1,000 years, the site once again became a venue for theatrical productions – now for Passion Plays. Pope Benedict the 14th had a Way of the Cross built in the impressive setting. The 14 stations recalled the sorrows of Christ. A huge wooden cross was erected in the middle of the arena.

In 1750 Benedict declared the Colosseum to be a memorial site for the Christian martyrs. That was fortunate for later generations, because the structure had become a handy stone quarry right in the city. Even some of the material for St. Peter’s Basilica was taken from here. Marble, travertine and even iron fittings were sought-after. A papal edict prevented any further stripping of the building. What remained was now officially a church.

During the following century the educated European elites re-discovered the building. Johann Wolfgang von Goethe wrote his impressions in his "Italian Journey":

“Any single object is swallowed up by the great masses of light and shadow. […] The Colisseum offers a particularly beautiful sight. It is closed at night, a hermit dwells in a little shrine in it, and beggars nest in its crumbling arches. They had lit a fire on the flat ground, and a gentle wind blew the smoke toward the arena so that the lower part of the ruin was covered by it while the immense walls jutted out above it.”

The Colosseum was one of the compulsory stops on the Grand Tour, the traditional educational trip through Europe undertaken by young men of means. And Rome did not want to make a bad impression on the visitors. In the early 19th century Pope Pius VII undertook to really clear up the site. The inscription under a wall painting in the Vatican commemorates his deeds:

"The Flavian Amphitheater, soaked with the blood of martyrs, freed of rubble."

Then he set up a commission to secure the ruin. It was high time: Heinz-Jürgen Beste, architectural historian, German Archaeological Institute (DAI):

"The Colosseum consists of seven large rings, and if one of those rings is open on one side but the pressure, the lateral thrust, is still there, then things keep breaking off of the ends. The measure was necessary to prevent more from breaking off.”

The commission weighed the various proposals to solve the problem. Heinz-Jürgen Beste:

“The commission picked the one from Stern, who said that it could be rescued even in its weakened condition, and he walled in these three arcades and then set a huge buttress – this enormous spur there – which is problematical today however because it doesn’t incorporate the curvature of the building but just pushes straight against it."

In 1827 the architect Giuseppe Valadier rebuilt three arcades on the south-west side, four years later Gaspare Salvi reconstructed eight arches of the third ring on the south side that had collapsed.

Now the scholars began to gain the upper hand. Initial excavations uncovered the basement – and the original condition was to be restored. The archaeologists challenged the Catholic Church’s prerogative to interpret the site.

In the year 1870 the Italian nation was founded, and from then on remained in conflict with the Catholic Church. The unification movement, the Risorgimento, had dissolved the Papal States. The new government objected to the Way of the Cross and the crucifix in the arena. The mayor of Rome said in 1874 that they contradicted the entirely pagan character of the monument. The pope threatened him with excommunication, but that was the Church’s last gasp in the matter. The Colosseum had once again become a secular site. 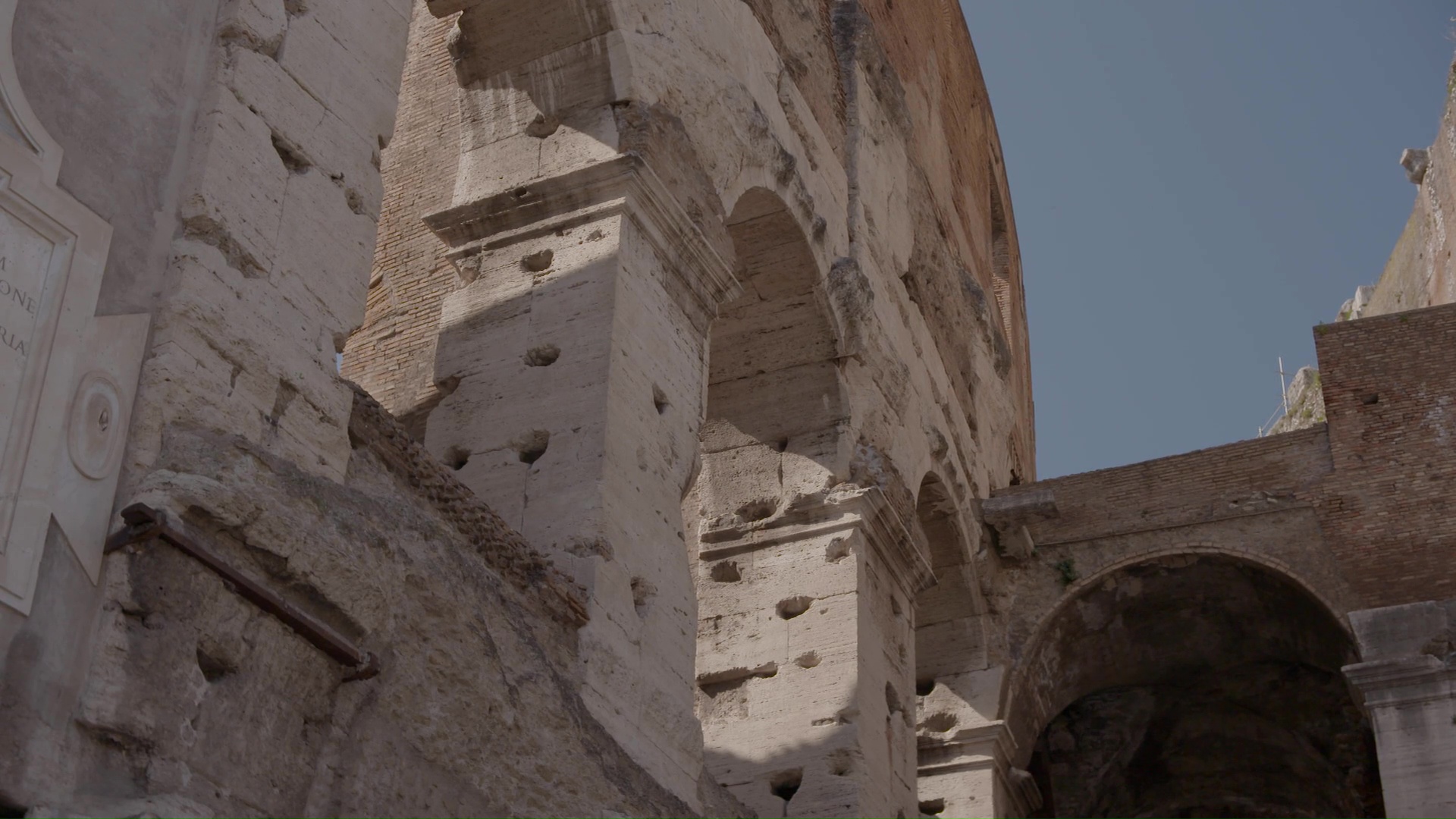 Several decades later Mussolini made it the crowning of his monumental road, the Via dell’Impero. Once it had symbolized the triumph of Christianity, now it served as a backdrop for Fascist processions. But Mussolini wanted reconciliation with the Church. In 1929 he signed the Lateran Accords – and as a small gesture the cross was restored to the Colosseum Today millions of tourists visit the monument every year. They are fascinated by the aura of a long-gone empire, by the notion of wild beasts and death-defying gladiators – and by the sheer size of this immortal structure.

"When you stand in front of this 50 meter high façade, it’s incredible to think that it was built 2,000 years ago and is still standing in a city that is really a modern city, with all the problems of traffic, of infrastructure, of sanitation and air pollution. And there is this giant building right in the middle of it all, still demanding its place as a central point in the city’s history."

As the monk known as the Venerable Bede wrote 1300 years ago: