Thebes is the Greek name for the great city that developed around the huge temples dedicated to the supreme god Amun-Ra. For more than a thousand years, it was the greatest religious centre, the "Vatican" of ancient Egypt. In the Middle Kingdom it became the political capital of Egypt, too. Its golden age came with the 18th dynasty: around 1500 BCE the grand temples were rebuilt to a size and splendour without parallel in the ancient world.

Since 1979, the ruins of ancient Thebes have been inscribed by UNESCO as a World Heritage site. 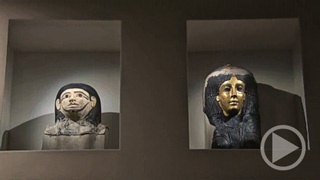 When somebody dies, they leave the realm of the living to reside among the gods. The mummy is needed for the transformation into an immortal being; each body part can be associated to a god. And, as the Egyptians wrote, gold is the flesh of the gods…
▶ The Berlin Egyptian Museum▶ Thebes
01:33 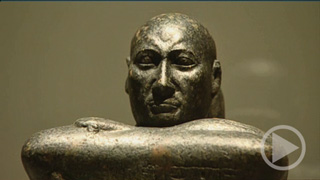 The Block Statue of Petamenopet

Petamenopet probably lived in the early 7th century B.C.; his burial complex is the largest one in Thebes. The statue shows his facial features in an unusually realistic way – marking an artistically creative transition between tradition and new ideas…
▶ The Berlin Egyptian Museum▶ Thebes
02:27 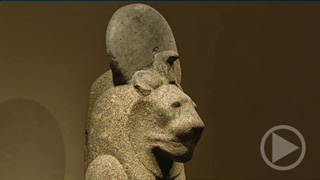 The Statues of the Goddess Sekhmet

These statues of Sekhmet, or "She Who Is Powerful", combine several aspects of the Egyptian idea of the divine, from the sun discs to the superpower of a lioness. These attributes she uses as the goddess of war - but she also to provide protection…
▶ The Berlin Egyptian Museum▶ Thebes
02:13
This website uses cookies - for more information about this and your rights as a user, please see our privacy policy. Click on "I agree" to accept cookies and to be able to visit our website directly".