On the Anatolian peninsula, some of the oldest settlements of mankind have been found: Göbekli Tepe is the site of the oldest known temple, dating to 10,000 BC. Çatalhöyük is the largest Neolithic site ever found. Later the Hittites founded the first major empire in Anatolia; around 1200 BC Greeks began to settle along the coast.

They founded a number of great cities, such as Miletus, Ephesus, and Byzantium. Inland Anatolia was conquered by the Persian Empire during the sixth century BC. About 200 years later, the whole peninsula fell to Alexander the Great, and after his death, became part first of the Roman, then the Byzantine Empire. Around 1000 AD, Seljuk Turks from central Asia began migrating into the area; they founded the Sultanate of Rûm. It disintegrated into several small emirates.

The one ruled by the dynasty of the Ottomans was to grow into an empire. In 1453, the Ottomans conquered Constantinople, ending Byzantium. Soon their realm included all of Anatolia, Egypt, Western Asia, and parts of Europe. By the time of Suleiman the Magnificent (1494/6-1566) the Ottoman Empire was challenging central Europe. A century later, the futile attempt to conquer Vienna marked the beginning of a slow decline. In World War I the Ottomans were defeated alongside Germany and Austria. The empire was divided into several new countries, the Turkish heartland occupied.

Led by the army officer Mustafa Kemal, however, the Turks fought for independence. In 1923, the modern Republic of Turkey was established with Kemal, now called "Atatürk" or "Father of the Turks", as its first President.

From Zeus to Allah 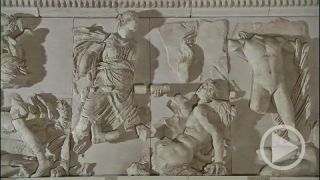 The great Altar of Zeus is an unmatched masterpiece of Hellenistic art. Built by King Eumenes the Second in 170 B.C., the frieze depicts the “Clash of the Titans”: the gods of the Olymp, led by Zeus and Athene, fight the sons of Gaea, the Earth Mother. ▶The Collection of Classical Antiquities, Berlin▶ Bergama
04:21

This mihrab was once the centrepiece of the Beyhekim mosque in Konya, created in the 13th century as a gift to Seljuq sultan Kilic Arslan IV. The frame is covered with Kufic script of the throne verse from the second surah of the Quran… ▶The Museum of Islamic Art▶ Konya
01:38
This website uses cookies - for more information about this and your rights as a user, please see our privacy policy. Click on "I agree" to accept cookies and to be able to visit our website directly".