Originally settled by Celts, the southern part of the island of Great Britain was part of the Roman Empire for more than 350 years, called Provincia Britannia. The northern third of the island, inhabited mostly by Celtic Picts, remained independent.

After the Romans had left, Germanic peoples invaded the island: Angles, Saxons, and Jutes founded kingdoms that were later conquered by the Normans, who were of Norwegian origin. The Normans, based in northern France, introduced the French culture that was to shape the country for centuries to come. More than half a millennium later England, Scotland, Wales, and Ireland were gradually united.

During the 17th century the country developed into a major naval power, and this led to the emergence of the largest empire in the history of mankind. At times, one fifth of the world's population and almost a quarter of the surface of the earth were part of the British Empire. But as early as 1776, the United States of America declared their independence. In 1931, most of Ireland was officially recognized as fully independent. And three decades after the Second World War almost all former colonies had become independent countries.

Yet, even today the British capital of London is one of the major cities and the most important financial centre of the world.

Courtship with a Little Help from a Master 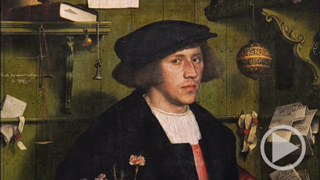 Can a portrait tell a whole story? It has to if it is to win a bride! Hans Holbein paints Georg Gisze - and tells us all about his life. Lucas Cranach is a wealthy entrepreneur as well as a master painter. His “Fountain of Youth“ tells of his dreams.
▶ The Berlin Gemäldegalerie▶ London
07:19
This website uses cookies - for more information about this and your rights as a user, please see our privacy policy. Click on "I agree" to accept cookies and to be able to visit our website directly".